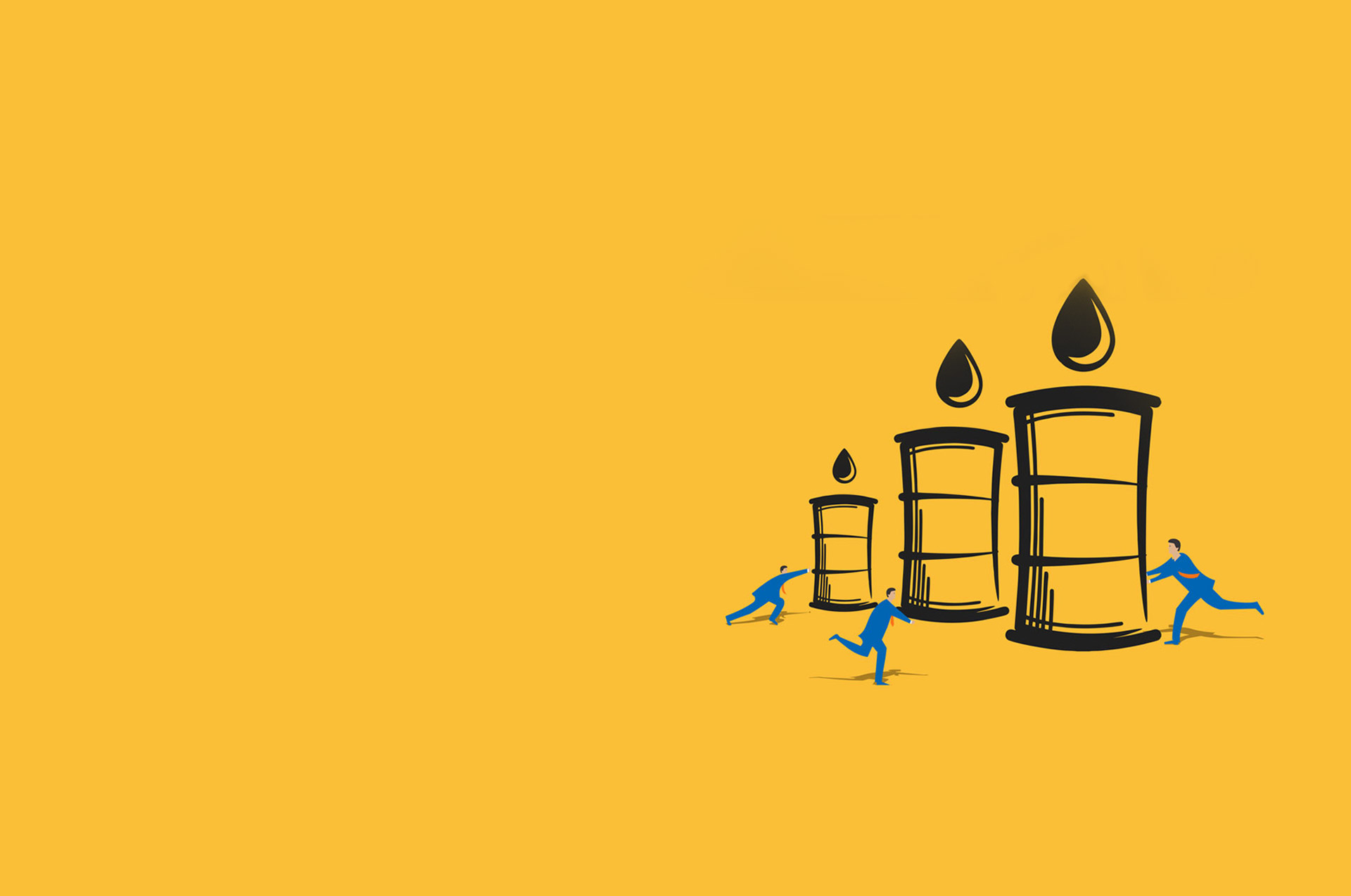 Impact, Opportunities and Strategies for Procurement Crude oil prices hit multiyear lows recently. Unlike previous dips, the impact of this market shock is expected to persist through 2015 and perhaps beyond.

GEP's commodity experts expect no significant change in supply-demand factors for 2015 and forecast prices in a range of $55/bbl to $65/bbl for the upcoming year. No doubt, such a fundamental shift in the crude oil sector will have a major impact on other commodities and supply chains overall.

This paper explores the key drivers behind the recent decline in crude prices and assesses the impact on other major commodities. The paper also describes four key strategies that would help enterprise sourcing and procurement teams capitalize on this global phenomenon.

2014 was a rough year for most major commodities, with almost every single commodity seeing a downward trend over the year. Energy prices were the worst performers in 2014, declining by an average of 40 percent (especially in the last few months). Grains and precious metals saw price declines as well, whereas industrial metals were a mixed bag. 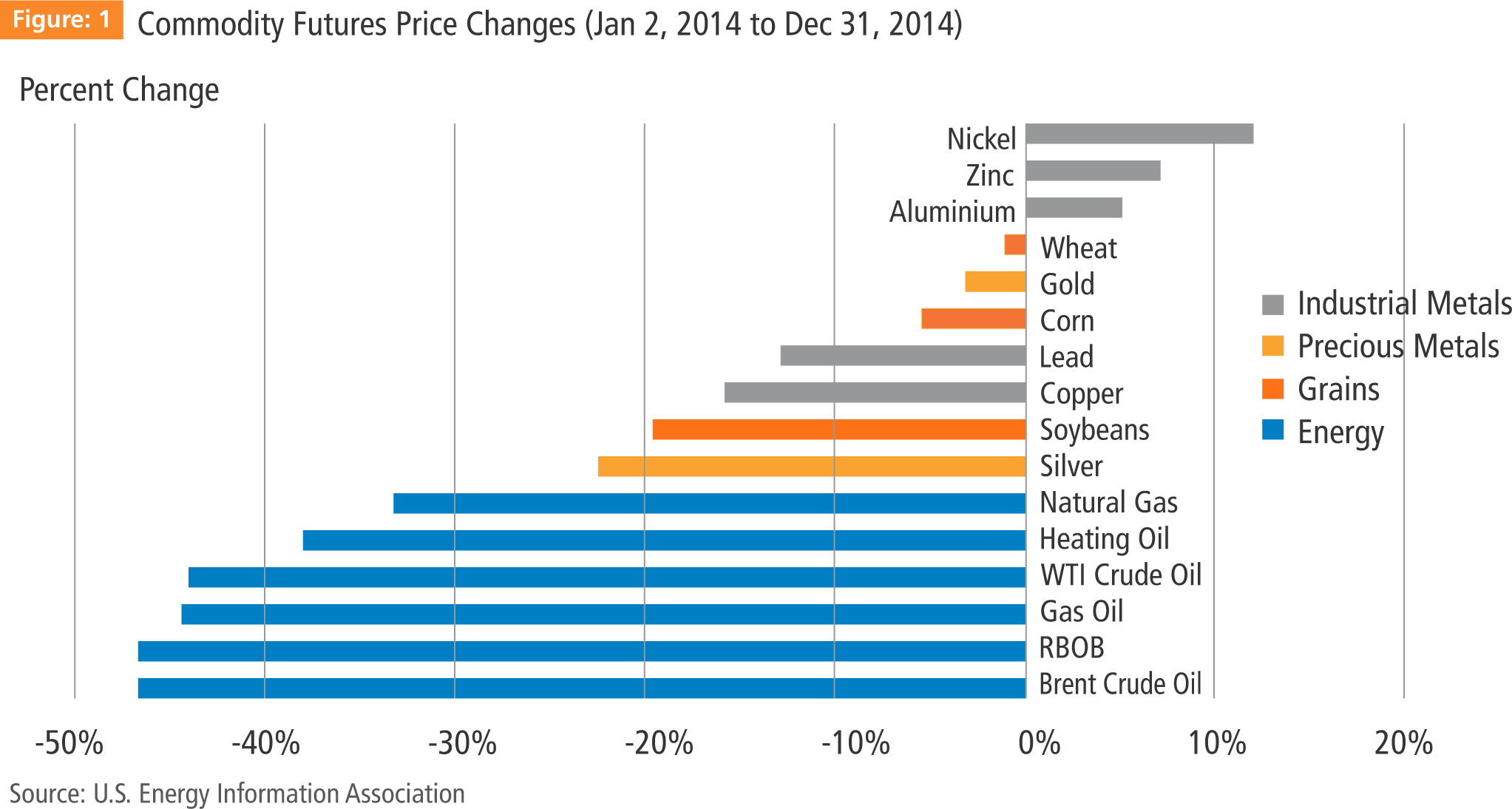 Nickel, zinc and aluminum were among the few commodities that saw a price rise in 2014, while the prices of crude oil, petroleum products, natural gas, grains, and other metals declined.

The 2015 global economic outlook remains largely flat at 3.5 percent, with the U.S. being the only large economy driving overall growth. The European Union is still struggling to kickstart economic activity. The Japanese 'Abenomics' experiment is expected to make small gains. China is adjusting to a new GDP rate of 7 percent given structural vulnerabilities, and Russia is expected to reel under the double whammy of economic sanctions and tumbling oil prices. 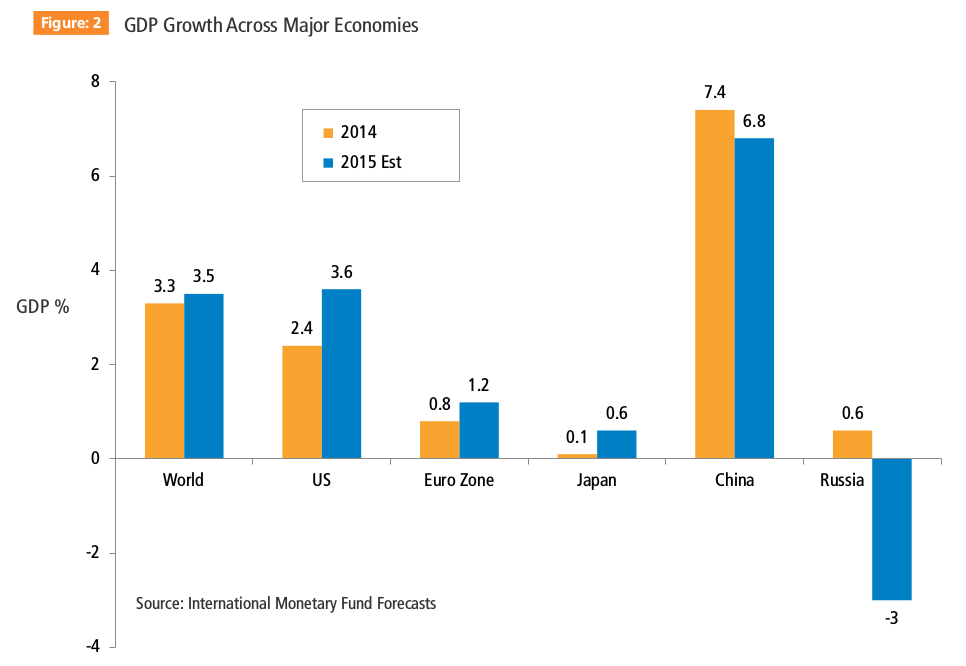 With this economic outlook, commodity prices are not expected to rebound significantly in 2015. Energy and industrial metals will stabilize, while precious metals will remain largely flat. More details on the drivers of energy prices and outlook for downstream commodities are explored in sections ahead.

Crude oil pricing in 2015 will be shaped by the confluence of several key supply and demand drivers. Although the U.S. economic recovery was strong in 2014, economic data in the rest of the world was generally below expectations. This impacts crude oil demand significantly, since most of the projected increases in future global consumption was outside the U.S.

There has been a steep slowdown in Chinese oil demand growth and contractions in Europe and Japan. It's likely that the adverse impact of the oil price plunge on oil-exporting economies will offset, if not exceed, the economic stimulus it provides for oil importing countries. All these factors point to a modest increase in 2015 demand, but not enough to absorb any glut in supply. 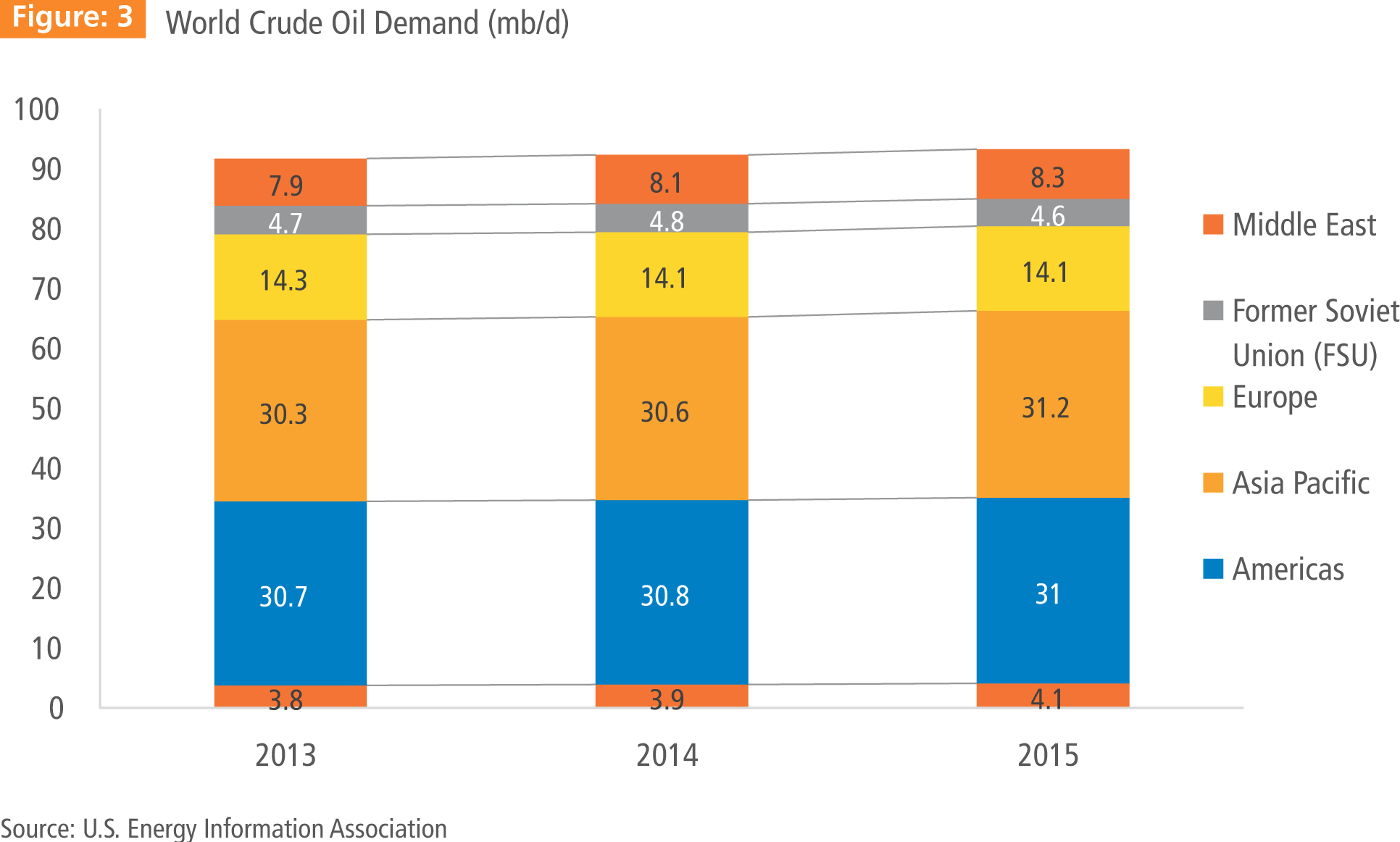 The U.S. shale revolution has been fueled by significant advances in horizontal drilling and hydraulic fracturing technology, resulting in a drastic increase in domestic production and a corresponding reduction in imports. Key drivers of the increase in U.S. production are the shale gas fields in Texas, North Dakota and Alaska, increasing production by nearly 70 percent in the last 3 years.

Saudi Arabia sees long-term risks in the expanding capability of U.S. shale gas production and is concerned about the long-term impact of the additional supply capacity being added to the oil market. Its strategy appears to be focused on pushing out high-cost oil producers (deep sea, tar sands, shale gas) from the market through unsustainable pricing.

Unlike other struggling oil producers such as Iran, Venezuela and Russia, Saudi Arabia has huge forex reserves and can easily sustain low oil prices for several years. Its own oil costs very little and is estimated at $5-6 per barrel to get out of the ground. The same cannot be said for other producers and Saudi Arabia hopes to get some of this supply removed from the market permanently (particularly the U.S. shale gas threat).

Despite lower crude oil prices, the market forecast is that U.S. production will remain unchanged at current prices as long as producers are able to maintain access to financing. Smaller companies will find the prices unsustainable and will lose access to financing, leading to several bankruptcies in 2015. However, while the Saudi squeeze will be effective in achieving its short-term goals, they may not be able to alter the long-term outlook.

Shale gas companies that can weather the current storm will see huge windfalls in coming years. A simple example of how shale oil has altered the economics of crude oil is indicated by the following — Exxon Mobil and Rosneft recently spent two months and $700MM drilling a single well in the Kara Sea, north of Siberia. Developing this reserve is expected to take several years and cost billions of dollars. By contrast, a shale oil well can be drilled in as little as a week, at a cost of $1.5 million. This indicates that the age of shale is here to stay and global oil supply will never be the same again.

This supply demand imbalance resulted in extra supply of roughly 1 million barrels/day in 2014. This is the longest such imbalance that world markets have seen in a long time and is unlikely to change in 2015.

Considering all these factors, GEP's commodity experts indicate a price range of $55/bbl to $65/bbl for 2015.

Plunging oil prices have reduced hydrocarbon input costs for all commodities, particularly costs for Natural Gas Liquids (NGLs). NGLs are hydrocarbons, composed exclusively of carbon and hydrogen. NGLs, such as ethane, propane, butane, isobutane and pentane, are used across all sectors of the economy, as depicted in Fig. 7: 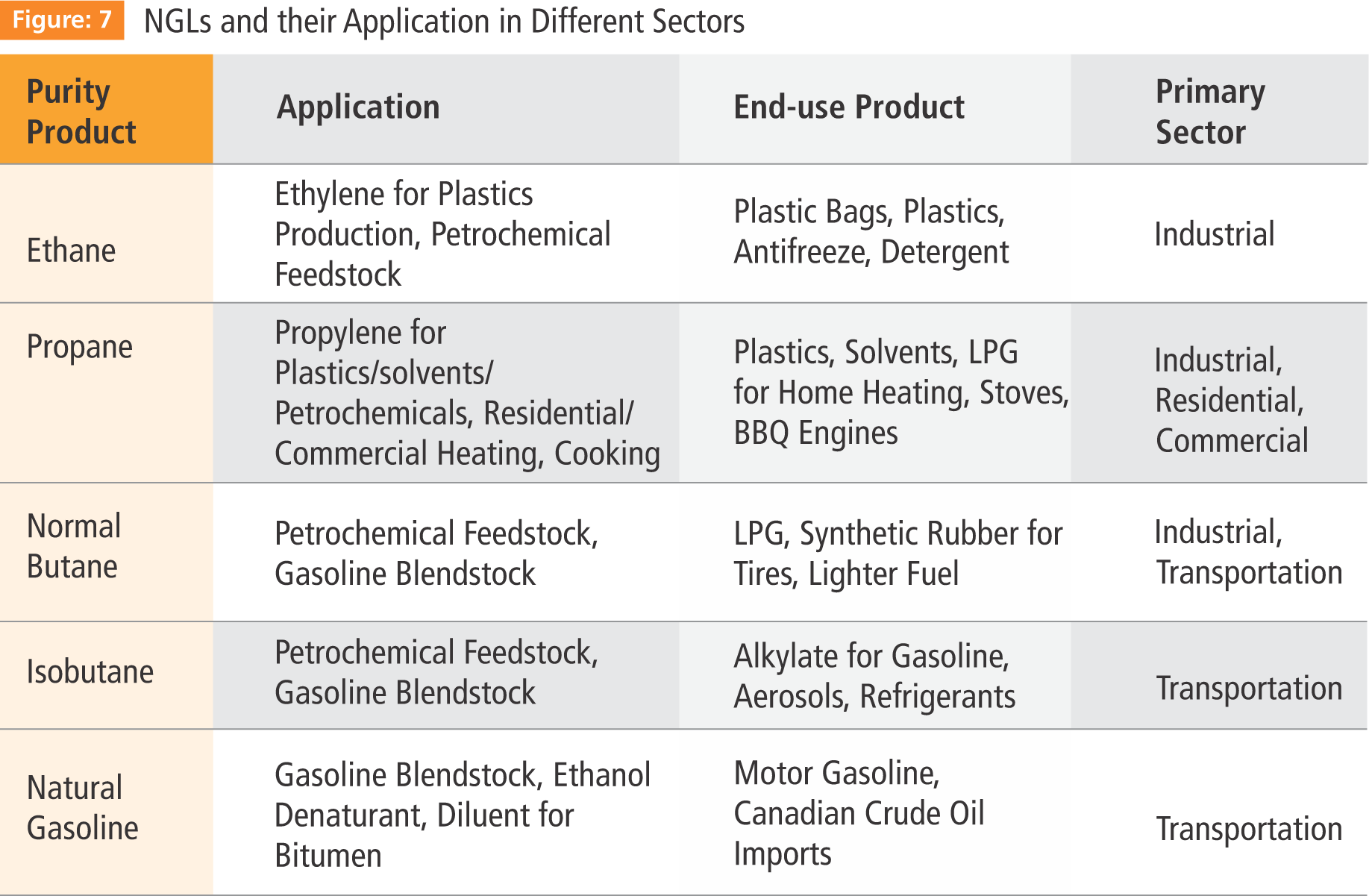 Ethane is the most widely used hydrocarbon, utilized almost exclusively to produce ethylene, which is the primary ingredient for a wide range of chemicals preparing commercial plastics. Propane is used as a petrochemical feedstock for ethylene and propylene, both used as building blocks for plastics.

NGL prices follow oil prices and dropped by at least 40 percent in the last four months of 2014. The cause is similar to crude oil – excess supply, with NGL production topping three million barrels per day (bpd) in 2014, and output climbing over 60 percent in the past decade. This has created a massive surplus, and thus, the plunge in prices. 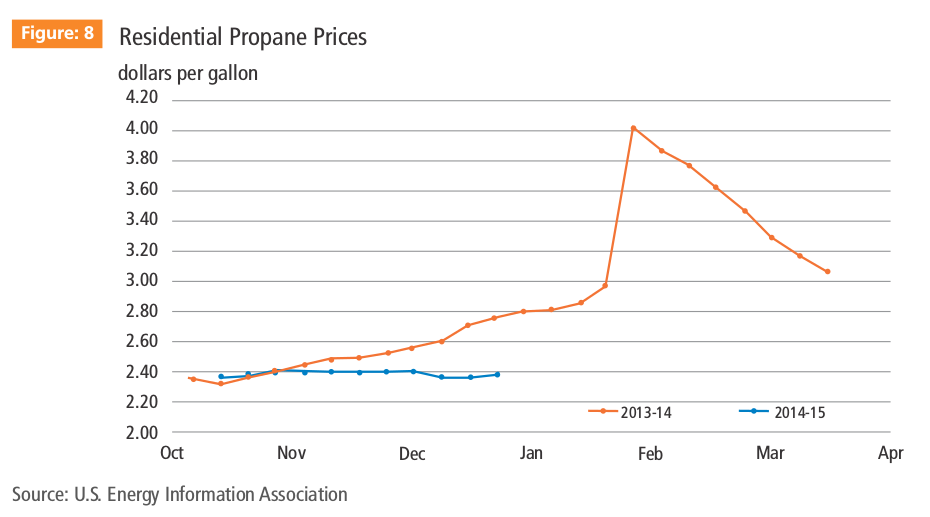 This pricing shift has a corresponding impact on the chemical industry — the biggest consumer of ethylene. Given the competitive nature of the global chemical industry, producers are unable to retain most of the margin benefit they get from lower feedstock prices.

Transparency in cost structures and input cost prices, along with contractual structures of the chemical industry result in lower prices passed onto end consumers. These price changes are usually reflected in output prices with a lag period. Given these factors, we expect sustained low prices in 2015 for downstream commodities impacted by NGLs – plastics, solvents, LPGs, resins, among others.

A similar impact of lower feedstock prices is expected in other industries such as fertilizers and transportation, and their downstream sectors such as retail, agriculture and manufacturing.

As outlined earlier, we expect lower oil prices and the resultant impact on downstream commodities to continue throughout 2015. This shift has significant implications for procurement leaders. A recent GEP survey found that less than 32 percent of companies rated their commodity price management strategies as “effective” or “very effective”. The following strategies will help enterprise procurement organizations thrive and optimize their performance even in these volatile markets.

Procurement leaders will need to develop a thorough understanding of key factors driving this market shift and keep a close eye on them. Proactive awareness of any change in this trend will enable procurement organizations to plan appropriately and respond quickly to ensure sustained supply at best prices.

The airline industry is a great example wherein proactive tracking and management of fuel prices makes a huge difference in the overall profitability. While most airlines continued with the long established practice of fuel price hedging over several years, American Airlines revisited the strategy regularly based on market conditions. Hedging strategies can protect airlines from rising fuel costs, but can also limit the upside when fuel costs tumble. American Airlines chose to tie its fuel prices to market pricing, given recent trends, and benefit from the market slide. Analysts expect American Airlines and merger partner US Airways to realize cost savings of more than $2.5 billion in 2015 through this approach.

Please note that GEP does not recommend a specific strategy of avoiding all hedges; rather, an ongoing assessment of market conditions and appropriate shift in strategy.

The underlying economics of several categories have been altered due to the commodity shocks of 2014. Procurement leaders will need to leverage more sophisticated analytical tools to understand category cost structures in greater detail, breaking out costs for raw materials, labor, processing, machinery, shipping, taxes, etc. A thorough understanding of these elements will help quantify the exact impact of feedstock price changes.

Whether done internally or through the help of a third party, should-cost modeling requires the right mix of skills, industry knowledge and cost accounting expertise. When applied properly, these models and other tools can help procurement leaders predict pricing changes and manage them proactively.

In a recent engagement, GEP worked with a leading manufacturing company to develop a comprehensive pricing tool using should-cost modeling and connecting the cost components to the final product price through an advanced formula. The tool enabled the client to achieve double-digit savings on a sustained basis and marked a significant advancement in its category management approach.

Significant changes in supply markets can also lead to potential risks of supply disruption or supplier failure. Many smaller companies may not be able to survive the new economic reality, especially in key sectors linked directly to crude oil.

Buyers should conduct a thorough risk assessment of their supply base, identify vulnerabilities, revisit existing contracts to utilize flexibility in lowering prices, and engage collaboratively with key suppliers to identify joint gains though this market shift. We are seeing several clients do this very effectively with their suppliers, especially for chemicals, transportation and plastics.

High oil prices have resulted in several infrastructural changes to global supply chains, including the broader impact of lower shipping costs on the increasing global nature of supply chains. A similar trend of smaller shipments and low inventory holding patterns is expected, again due to decreased shipping costs.

Enterprises are strategically reducing their inventory positions and placing smaller, more nimble orders. Finally, we expect enterprise supply chains to move away from their push strategies (long-term forecast based on aggregate demand) to a pull strategy (shorter forecasts with greater levels of flexibility).

Lower crude oil prices will continue throughout 2015 and exert downward pricing pressure on several related commodities and industries. This “Black Swan” event offers an ideal platform for procurement leaders to make a huge positive impact on their functions and organizations.

Procurement organizations can mitigate supply side risk and maximize savings opportunities by understanding the key drivers of this global shift, assessing value chains of major categories & feedstock impact, engaging with the supply base and fundamentally realigning their category strategies to this new normal. Our report is essential read for procurement leaders and category managers who want expert insights as they look to move beyond the challenges of the pandemic year. The report will help understand fundamental business changes and new market dynamics in 16 of the top direct and indirect spend categories.

How Procurement Can Help Unlock Value From Media Agencies

A Digital Map to Efficient Category Management — The New Normal