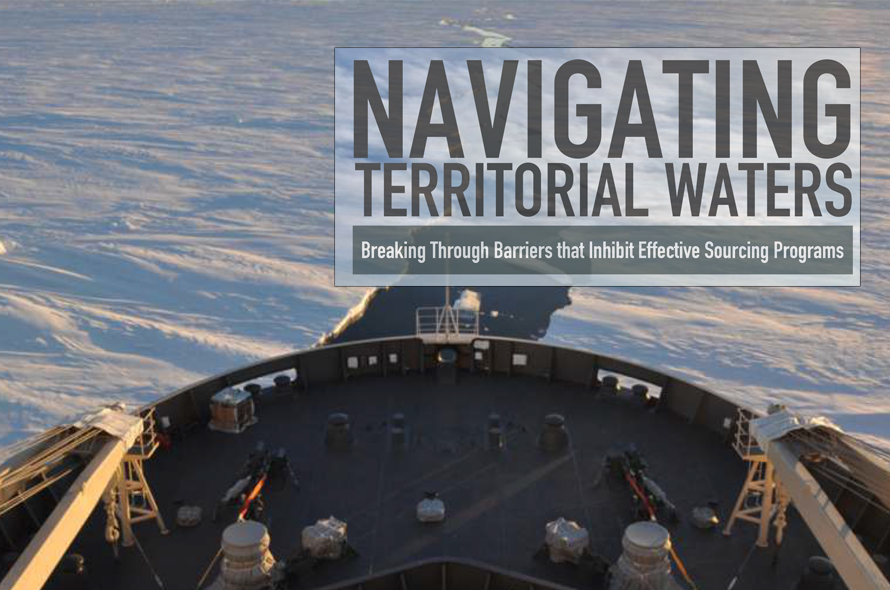 Companies that undertake large sourcing initiatives are often confronted with obstacles, such as organizational challenges, that can hinder the success of the program. Such barriers usually surface when two organizations have divergent ideas as to why, how and if an initiative should move forward.

Success here requires a structured approach. Understanding the perspectives of stakeholders and employing strategies for breaking down these barriers can ensure a successful sourcing program.

This paper outlines a process that procurement can follow to facilitate these opportunities, taking into account key strategic, operational and financial considerations.

An all too familiar scene: a sourcing project with great promise is suddenly stymied because of stakeholder inaction, pushback or internal conflicts. Why does this happen?

In today's complex and highly competitive business world, management's drive for competitive advantage edges toward delivering goods and services efficiently and effectively. This often translates into cost efficiency and effectiveness.

The drive to continually lower operating costs is fueling a rise in strategic sourcing projects across virtually every industry sector. The success of these projects will likely be mixed as many will be poorly thought out and hastily implemented. How then does a company ensure that its sourcing project is successful?

First, one needs to learn from history. Why do large sourcing projects fail? And failure in this context does not necessarily imply “crash and burn” failure, but rather the circumstance of significantly underachieving the potential benefits of the sourcing program.

In most cases, it is not because the opportunities for saving money just aren't there. On the contrary, for large organizations, savings from well executed sourcing engagements are usually around 5 to 10 percent on average, across various commodities1. Rather, project failures can typically be traced to how well the project is conceived and planned, and to what extent key stakeholders in the involved organizations align, communicate and consult with each other about the initiative. These and other potential barriers can play a large role in the success of the project.

There are many barriers to effective execution that can seriously hinder a program if they are not properly identified and managed. Chief among them are:

Lack of constructive engagement with procurement stakeholders and failure to obtain their respective buy-in to the sourcing program before the project begins can be a significant barrier to the success of large-scale sourcing projects.

All too often departments have had projects foisted upon them with little notice or explanation about what the project is supposed to accomplish, how it will be executed, or what the department's role and responsibility is in carrying out the mission. This lack of collaboration and team building can have an upsetting effect on the success of the project, particularly when there are unclear expectations about roles, responsibilities and outcomes.

Competing agendas among the parties involved with the program is another barrier to effective execution of sourcing projects. Sponsors or other stakeholder groups might have different expectations, or might seek differing outcomes from sourcing engagements which, if left un-reconciled, could hinder the effectiveness of the program.

While cost savings is most often the driver of large-scale sourcing projects, parties with a stake in a project's outcome may emphasize different agendas or priorities as far as what each wants to get from the project. Gaining alignment across various constituencies is one of the more difficult, but important, activities for large projects.

Whenever a large-scale project is undertaken, it is usually executed as a set of activities separate from — but in addition to — the day-to-day work for employees. Often, people are asked to “do more” to support the project than what is typically required during their routine work day. In many cases, this additional workload can create a barrier, given that there are usually few rewards provided to people for participating in such projects.

In one specific example, progress was hampered on a large-scale sourcing engagement when procurement personnel considered requests for information and access to supplier contracts, which were essential to identifying savings opportunities, as “not part of normal work” and hence were be given low priority. In this case, requiring people to do work that was outside of their normal responsibilities significantly affected the project's progress and required sponsor intervention in order to gain access to the information required to complete the assignment.

Lack of explicit executive sponsorship can also affect the outcome of an initiative. Executive sponsorship is arguably one of the most important contributors to a project's success. It does not need to be complicated, but it does have to be visible; it can set the proper tone for the project by championing the initiative within the organization, providing information and status on the initiative, and offering important support when difficulties arise.

The project sponsor should be a senior executive, preferably a “C- level” person who is responsible to the business for the success of the project. A C-level sponsor brings the needed organizational approval and concurrence that the project is viable, timelines will be met, and parties will cooperate in its execution. The project sponsor has the authority to stop the project or propel it forward, and is invested in its successful outcome. Close involvement on the part of the sponsor is an effective way to keep

A clear example of several of the aforementioned barriers were present in the following engagement:

There was a clear lack of executive sponsorship, constructive engagement between shared services and procurement, and misalignment of roles, responsibilities, expectations, and outcomes. Procurement saw little need for the project and viewed shared services as “playing in their sandbox” since they had little-to-no say in the project's planning and/or execution. As a result, procurement pushed-back hard against the project by restricting access to people and information required to develop the pipeline of procurement savings opportunities.

The lack of executive sponsorship, passive and aggressive behavior on part of the procurement organization, and sub-optimized savings because of conflicts between the two organizations, contributed to a less-than-ideal sourcing project.

So how do we best navigate these “territorial waters”, when two organizations have divergent ideas as to why, how and if an initiative should move forward? Applying basic conflict management techniques is an effective way to resolve these types of issues and get projects back on track.

There are many techniques for dealing with a conflict, each with its own pros and cons. Techniques involving accommodation, avoidance, or confrontation can resolve conflict, but in the end may result in one party feeling that they were on the losing end of the process. Results from these types of conflict resolution techniques are often difficult to implement and issues may reappear again when they have thought to have been resolved.

Compromise, as a technique, often works because of the “give something/get something” nature of negotiations. However, although compromise often results in a more fair result where everyone gets something, it often does not result in the ideal outcome.

The collaborative technique for resolving conflict is often seen as the “win/win” approach, in that the parties collectively search for solutions that enable a win for all involved. Figure 1, shows conflict resolution techniques on a relative scale of “assertiveness” (how much interaction there is between the parties) and “cooperation” (how much the parties share in the resolution of the problem). 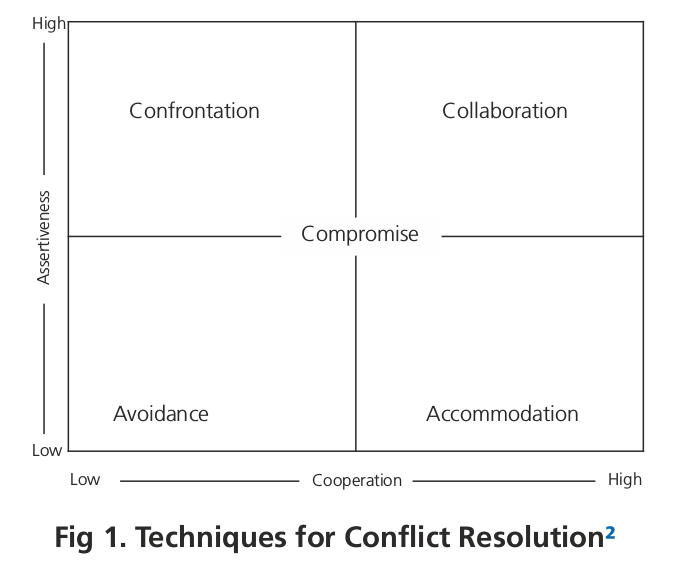 Approaches to dealing with conflict are often driven by what type of conflict is in play. However, regardless of the type of conflict, there is typically a standard set of steps one should take to assess the extent of the conflict.

Once the extent of the conflict is known and understood, the parties can assess options for resolving the problem.

The strategies for dealing with conflict are not all created equal and many of the concepts can actually lead to more problems. And while we've seen that there are a number of strategies that can be employed to resolve conflicts, the one that yields the best solution is the one that relies on collaboration and consensus building.

At its core, collaborating and gaining consensus on how to best resolve a conflict involves gaining mutual agreement among the parties on how to do so. A good definition of consensus is...”A decision or position reflecting the collective thinking of the parties that all members participated in developing, understand fully, believe is workable, can live with, and will actively support3”.

The collaboration and consensus technique most often leads to a project's success and strengthens the relationships between the parties involved. While this technique is an effective conflict resolution tool and can yield a favorable outcome, it can also involve the most time-consuming processes to address the conflict.

3. Mac McIntyre, How to Gain True Consensus on Team Tasks and Decisions

The goal should be to achieve the outcome that best reflects the positions of all members through consensus — this can be a lengthy and contentious process. Many people misunderstand what it really takes to “reach consensus”, so it is easy to be mistaken about what constitutes a consensus view.

Following are some guidelines4:

Gaining Consensus Is Not:

In our case study example, we have two parties with differing perspectives on the viability and conduct of a sourcing project.

To remediate the project, we employed consensus building techniques with conflicting parties to gain alignment on how and why the project should be executed, and who should be in charge. The process was collaborative and inclusive; viewpoints were solicited and considered. After lengthy discussions about the merits of the program, and identification, agreement and on-boarding of an executive sponsor, the project was able to move forward. The sponsor subsequently evaluated the entire program and totally revamped its structure, including ceding ownership of the program to the procurement organization, laying out the ground rules for communications among the parties, and clearly defining the program's roles and responsibilities.

As we've seen, approaches to resolving conflict can vary, and success largely depends on how aggressive the parties are about getting their own way and how accommodating they are toward others' positions.

Although parties may use different conflict resolution approaches depending on the situation at hand, a collaborative effort is usually is the most effective approach. Collaboration seeks to identify alternative solutions that best satisfy the needs of both parties. And while collaborative solutions may be difficult and time consuming to achieve, they promote a higher level of acceptance and support. 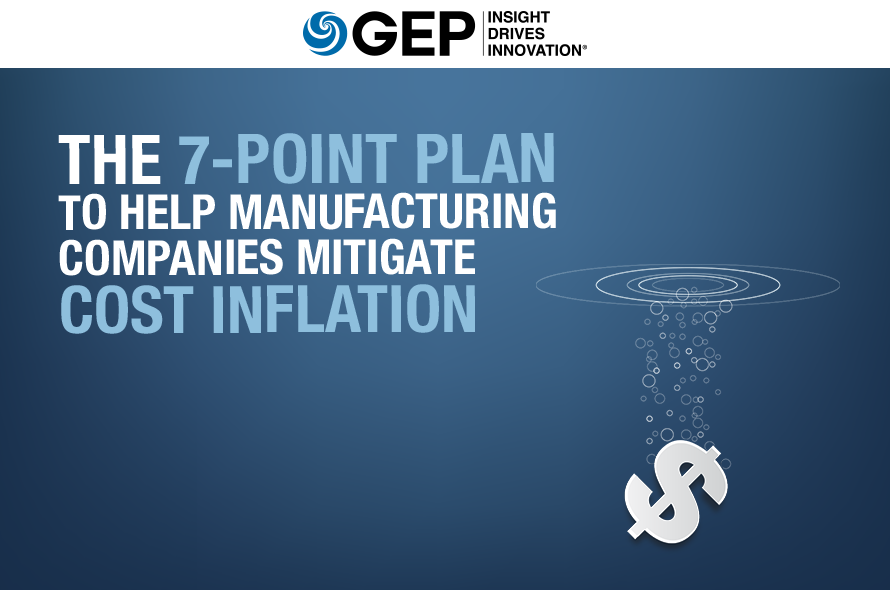 How Procurement Can Help Unlock Value From Media Agencies

A Digital Map to Efficient Category Management — The New Normal

How To Achieve True Net-Zero Emissions: An Action Plan for Supply Chain Leaders