One of the key services used by the manufacturing and process industries in the MRO space is industrial maintenance services, comprising of mechanical, electrical, construction, industrial cleaning, scaffolding, welding and fabrication services. Over the years, end users have increasingly resorted to outsourcing of these services, as they were non-core and outsourcing enabled them to reduce costs by eliminating unnecessary equipment.

The North America industrial maintenance services market is valued at USD 186 billion in 2016 and is expected to grow at a compound annual growth rate of 4% during the next few years. When compared with other regions like Europe, LATAM and APAC, this segment is fairly mature in the US and Canada in terms of offerings from the suppliers and geographical coverage.

Some of the key players in the North American market are Johnson Controls, Jacobs, Flour, EMCOR, Safway, Brand, Veolia, MMR Group, Brock, Turner Industries. These are players with a wide geographic scope and service offerings.

Even the though the North American market is mature in comparison, the market is still highly fragmented. We expect the slow aggregation of smaller players by regional and nationwide firms to continue as end clients increasingly outsource end-to-end functions in maintenance services.

Players in this segment are expected to be highly competitive, as there is a lack of differentiation of service providers. Large integrated service providers are smaller in number and face stringent competition from local/regional players. 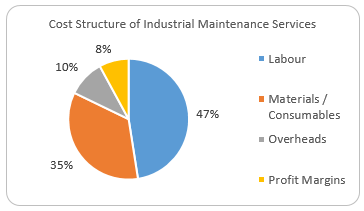 Two key drivers of cost are labour and consumables.

Electrical services generally have a higher component of consumables. Electrical works which are control-based have higher raw material costs for control systems like motors and subassemblies, compared to non-controls.

In engaging with suppliers, the following are some of the key negotiation levers.