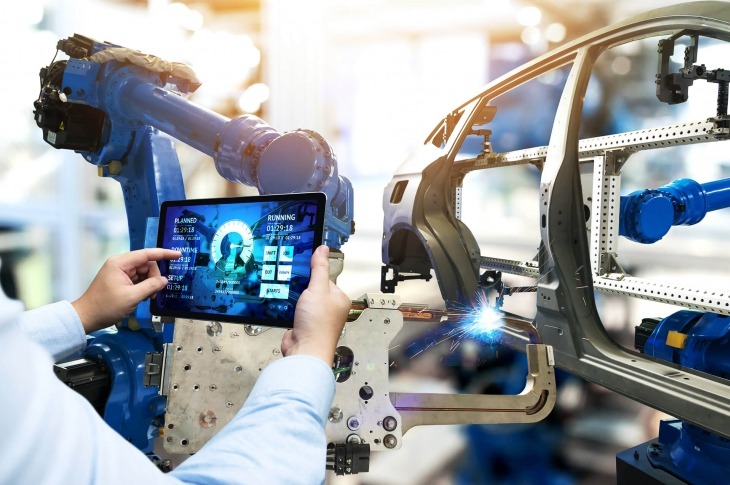 Among the many digital technologies, IoT will play a major role in creating system- and company-wide efficiency gains, with remote monitoring leading to better predictive and preventative maintenance, and enabling automation. Mercedes Benz has connected all its factories globally to gain visibility at the sensor level. This across-plan connectivity helps Mercedes significantly in leveraging learnings from one plant to another, keeping all data and monitoring in sync. For instance, a lead plant for compact cars can access data from other compact car plants and assist with any troubleshooting or even reprogram robots. The setup also enables concurrent rather than consecutive plant upgrades.

On similar lines, General Motors has connected about a quarter of its 30,000 factory robots in the U.S. region to the internet. Robotics manufacturer FANUC teamed up with Rockwell Automation and Cisco to deliver a solution, “Zero Downtime” (ZDT), at General Motors. Harley-Davidson implemented an asset connectivity program at its major production plant in York. Every asset on the plant floor is connected, and every step-in production is tracked and incorporated in a real-time performance management system.

Ford is currently testing 3D printing of large-scale car parts using the Stratasys Infinite Build 3D printer. The company is exploring potential applications for future production of vehicles, including Ford Performance products as well as personalized car parts. Increasingly affordable and efficient, 3D printing of large automotive parts, such as spoilers, could benefit Ford’s business and its customers; printed parts can be lighter in weight than traditionally manufactured parts, and may help improve fuel efficiency.

Tesla and Porsche are the early adopters of blockchain in the automotive sector. Tesla is at an initial stage of implementing its plan to trace cobalt (used in electric vehicles) to it sources from the Democratic Republic of the Congo to ensure ethical sourcing of cobalt. The company plans to implement a similar tracking system for nickel, as it currently faces challenges in tracing nickel back to its provenance as it comes from a three-to-four-tiered chain of suppliers. This will help Tesla gain better visibility into supply chain inventory optimization and take necessary precautionary measures in case of shortage conditions such as the recent cobalt shortage.

Porsche is the first auto manufacturer to test blockchain technology directly in cars. It has engaged with Berlin-based startup XIAN to test applications such as locking and unlocking the vehicle via an app, temporary access authorizations and encrypted data logging. The process time for opening and closing has already reduced by six times to just 1.6 seconds. Other benefits include chronological and safe recording of all activities using cryptography, easy adaptability of smart contracts without the need for additional hardware, and protection of all communications between participants.