Modular construction is a process where large, pre-engineered units — called modules — are built off-site and are then assembled on-site. These factory-produced modules are built using the same design and materials and follow the same codes and standards as a traditional building would but can be put together in half the time. There are many benefits offered by modular construction, which range from savings in spend, time, and energy expenditure to greater quality of the final product, as the modules are constructed under controlled plant conditions, ensuring a lower likelihood of unforeseen errors and mishaps.

The primary advantage of modular construction in a new design is the shortened construction schedule for the customer. Since the construction of the structure is done at the same time as site work, it allows the project to be completed between 30% to 50% quicker than traditional construction. Moreover, construction delays due to undesirable weather and other external factors are essentially eliminated as the modules are built in a factory environment and can be assembled when conditions are favorable for on-site work, all of which assist in amplifying the efficiency of time and resources used.

Modular construction also benefits customers by being more cost-effective than traditional construction. Modules constructed in a factory generate less waste, eliminated material such as wood cut-offs can be used for other buildings, and surplus elements such as wires can potentially be recycled. Modular construction demands fewer resources, enabling greater savings that can then be passed on to the buyer. Further, building modules can be disassembled rather than demolished and individual elements can be renovated for later use or can provide the buyer with good buyback value, which reduces the total cost of ownership of the building. Finally, constructing modules in a controlled indoor environment lowers the risk of accidents to construction crew members or damage to building materials, which helps avoid delays lowers the cost of the project.

The emergence of modular construction as a preferred method comes as no surprise when one looks at its benefits in terms of time and cost. For example, a building that would take 12 months if constructed from start to finish using the traditional method can be built by a smart contractor adopting modular construction in between 6 to 7 months (see figure below). The traditional method is a time-consuming affair, as on-site construction can only begin after the completion of site-preparation. However, in the modular method, the off-site construction of the building begins in parallel with site-preparation, often ensuring that the installation of modules can commence immediately after the site is prepared, and often in parallel with the manufacturing of other modules. 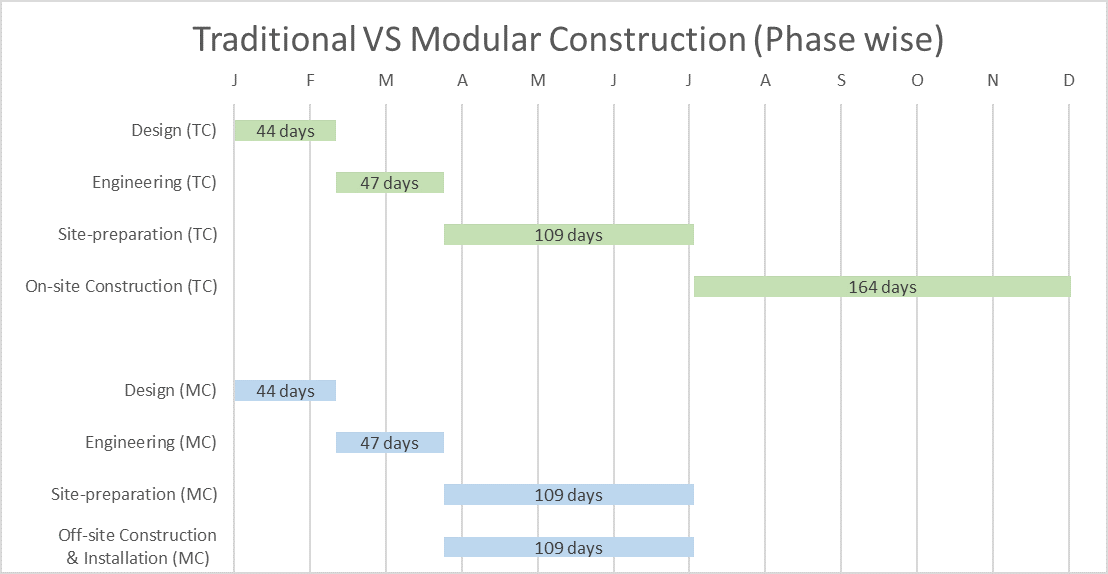 Modular Construction also has the potential to provide a solution to problems such as high real-estate demand and housing shortages, while also making construction in remote locations and unfavorable conditions more cost-effective and faster. Advances in technology will also power the upward trend for modular construction, as the availability of manufacturing techniques such as 3D CAD (Computer-Aided Design) and laser-scanning equipment has made modular construction more seamless.

The Building Blocks of the Future

Currently, a lack of awareness of the benefits, coupled with regressive laws, regulations, codes and standards in some regions are stopping modular construction from achieving its full potential for growth. Nevertheless, the modular construction concept is being increasingly adopted around the world. Fluor Corp., an American multinational engineering firm, has used modular construction for offshore oil and gas projects and at its chemical plants, reducing costs by up to 40%. In addition, moving 90% of the construction-related task to the factory through modular construction enabled the China-based Broad Group and the Indo-European steel manufacturer ArcelorMittal to construct buildings as high as 57-storeys in a mere 19 days.

Shorter project lifecycles allow for procurement teams to save approximately 10% of the project cost and ensure a good return on investment. Furthermore, modular construction is substantially eco-friendlier and more sustainable as it eliminates a significant amount of waste and generates lower amounts of pollution, dust, noise and traffic disruptions during the construction of even large-scale structures, such as skyscrapers and bridges. A potent combination of economic and ecological benefits that help builders and buyers alike has seen modular construction prove to be a robust and increasingly popular method in the construction industry.