Amazon Lockers vs. Delivery Drones — Which One Makes Sense for the Future?

Amazon’s insatiable appetite to constantly push the envelope and create an exciting customer experience has led them to unprecedented outcomes and successes.

The move to install Amazon Lockers at Whole Foods stores has yielded significant benefits. While short visits to the stores have increased, shoppers hassled by “porch pirate” package thefts can now securely collect their orders from a locker at no additional cost. Of course, Amazon plans to sell additional items by strategically positioning them next to the lockers. It will also be an ideal way for the company to promote new products and features to bolster brand awareness. 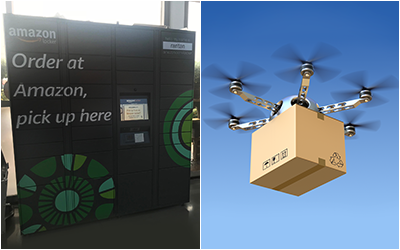 But how do we view Amazon’s decision to install lockers at Whole Foods, especially in the expectation of another of their innovations — delivery drones — now set to take off? Named Prime Air, the drone delivery service was unveiled in 2013 and will enable Amazon to deliver packages to destinations in 30 minutes or less. Delivery drones could significantly reduce costs incurred by way of last-mile logistics and truck delivery. To put things into perspective, in 2017, Amazon spent over $20 billion on shipping, which according to an analysis could have been as little as $10 billion or even lower had the company deployed drones. However, U.S. government regulations have prevented it from becoming a reality, until now.

So, could it possibly be a misstep on the part of the trillion-dollar company to invest in Amazon lockers (at Whole Foods) as a more profitable strategy would be to further improve service quality and drive down costs through drones? Perhaps not. Amazon Lockers at Whole Foods could be a strategic ally to the drones serving as an apt location for the packages to be dropped (ideally the lockers would need to be placed outside). Perhaps, building the lockers on the roofs could be an option. This will be a highly secure and convenient option for shoppers who could walk into a nearby Whole Foods store on a day and at a time of their choice. Moreover, expect Amazon out of all the companies to realize that no matter how advanced and simplified delivery becomes, the old-school solution and immediacy of in-store buying will not fade away any time soon. And we all do succumb to impulse buying, don’t we?

So, it might look like an odd strategy on behalf of Amazon, almost a retrograde step, but we shouldn’t lose sight of the bigger picture. It is this: there is no endgame in technology development. Rather there are multiple threads that run in parallel. Sometimes, the old makes way for the new.  Sometimes, the new integrates with the old to form a powerful new synergy, and sometimes, the old coexists with the new to serve different purposes. And that is what is so exciting about development, it’s never simple and straightforward.

Like retail logistics, procurement is undergoing a similar evolution, with unified source-to-pay procurement technology emerging as the new state of the art. The era of classifying procurement into source-to-contract and procure-to-pay could well be on its way out as procurement finds itself a new, more holistic definition. Ease of navigation, integration, end-to-end visibility and the ability to drive a big-picture scenario are the key advantages of this source-to-pay technology. And like Amazon’s technological innovations, it is fundamentally driven by a recognition that results come from a great user experience.